By opting into the web form above you are providing consent for Lake Effect Martial Arts to send you periodic text messages. Standard rates may apply. You can reply HELP at anytime or learn more. You may opt-out anytime by replying STOP.
ACCESS OUR SCHEDULE
& EXCLUSIVE WEB SPECIAL

By opting into the web form above you are providing consent for Lake Effect Martial Arts to send you periodic text messages. Standard rates may apply. You can reply HELP at anytime or learn more. You may opt-out anytime by replying STOP.
Hugo Hur

There is no question the society we live in despises shame. I’m not so sure why? Shame is defined as: “a painful feeling of humiliation or distress caused by the consciousness of wrong or foolish behavior.” That is why we have pain sensors and nerves. If we are to leave our hand on a hot stove or in freezing water, eventually we will lose it. This is what pain tells us, It says “Stop before it’s too late!”

Shouldn’t it be the same rule for everything else? We are always hearing that criticism that elicits shame should be avoided at all costs (i.e. “fat-shaming” and “slut-shaming”). Fair enough, no one should be insulted or ridiculed in an effort to help them; but, if we are truly someone’s friend, we know when it is time to step in and tell them when they are being foolish or just plain wrong. No one should ever insult someone for being overweight, but even without insult, you can’t escape the negative. One who is overweight may suffer in life expectancy, physical ability and stamina to do things with friends and family, health related causes (heart disease = #1 killer), as well as their own self-esteem, and general sexual attraction. As with “slut-shaming” which can affect a persons physical health, ability to maintain a stable relationship and most likely long term emotional health.

Pretending otherwise never really changes our conscience. It always knows. Everywhere we look we observe social networking addictions developing. Online Facebook and Twitter wars get more and more heated over opinions that really have no relevance over why we should hate someone. People get disappointed when they don’t get as many clicks on the like button as they thought of they received the last time. Everyone becomes an advocate without leaving the computer. When we feel the anxiety of slipping out of the spotlight, we invent Throwback Thursday or Flashback Friday to remind people of what we did once or who we know/knew. And none of it ever has any validity to our worth as humans.

Those of us that train Jiu Jitsu have a beautiful ability to at least somewhat slip out of the cycle, at least for a moment. In my 12+ years in this sport I have observed some of the worst offenders of achievement affirmation addiction. But, I think one of the best things this sport offers is that for those two hours when someone else is trying to choke you unconscious, you can’t really think of anything else. It provides that reset. At least for a moment, before we take our post training picture.

There’s nothing wrong with being proud of your achievements. Especially when you do something like drop 15 pounds of unhealthy body weight and permanently make positive lifestyle changes, if only for the reason of wanting to be the best version you can be every time you step on the mats. The ability to become austere and ascetic gives you a true sense of confidence to conquer your demons and anything about yourself that you want to change.

Personal affliction, at least for me has been the greatest driver of success. Many of the greatest at this craft have used a chip on their shoulder to achieve unimaginable heights. Keep in mind the best quarterback in NFL History was passed over by every team in the league, five times over. If you are unhappy with someone’s perception of you, use it to fuel that fire inside. Don’t stomp your feet and wait for someone else to pick you up and give you the affirmation you expect.

The “screw you, I’m gonna be me, Girl, stop apologizing” attitude will more often than not be more of a hinderance than a help. It is a modified life version of being uncoachable. Sometimes we have mistakes and sometimes we can do things better. Until we are willing to admit that though, we will keep making the same mistakes. Again. And again. And again. 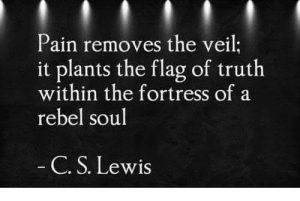